Patent-pending neighborhood search engine that uses statistics to build neighborhood profiles that allow individuals and families to instantly find the best neighborhoods for them based on criteria they choose, in any part of the U.S. 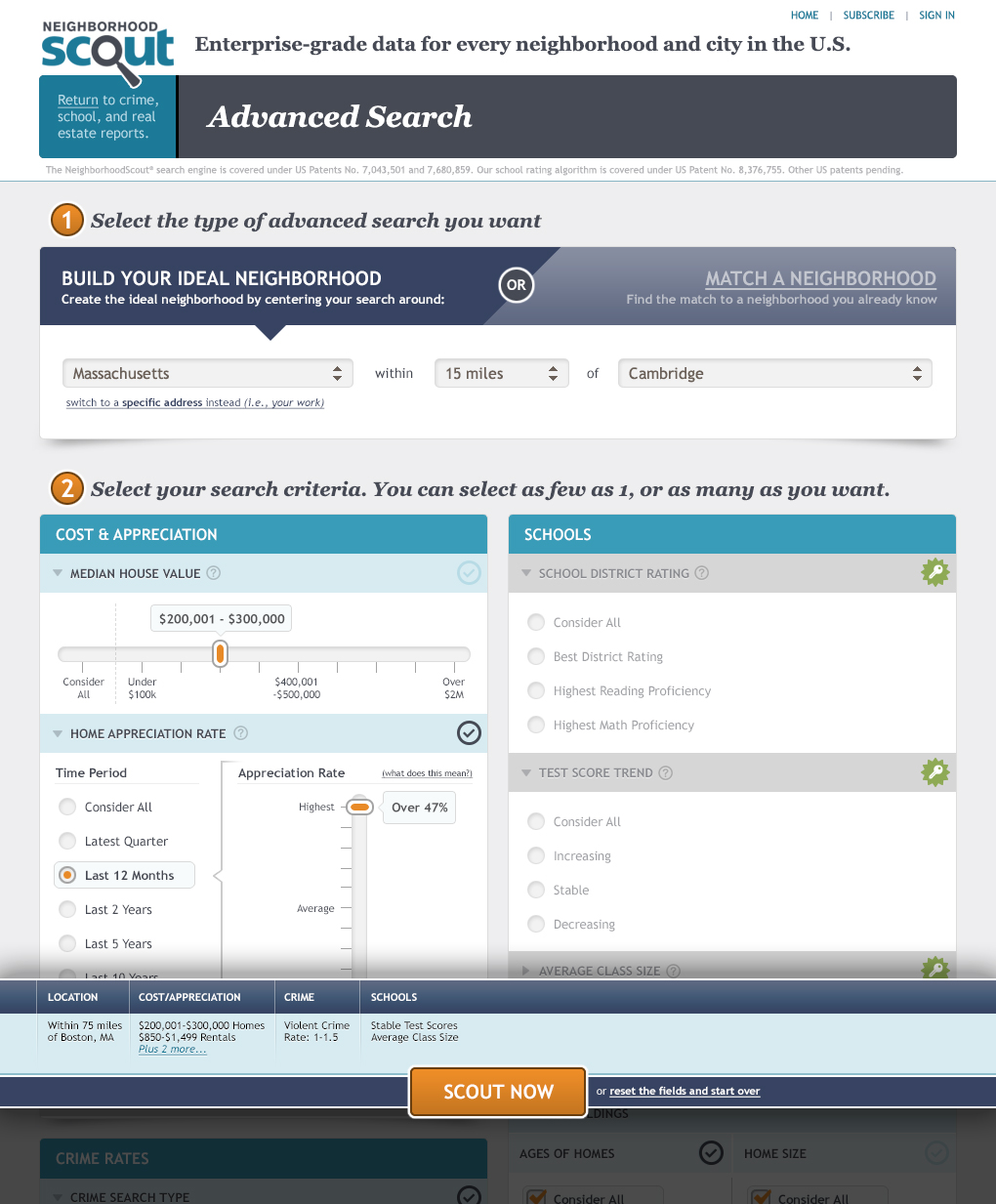 The great team at Location, Inc. have been clients of mine since early 2012, and we’ve already launched a number of projects together. One of them being the redesign of the search functionality being used on NeighborhoodScout, one of their key brands. Previously, the search was broken down by three different tabs: the ability so look up a report on a specific location, choosing from one of the pre-defined searches, or finding the match to an existing neighborhood. Since we were planning on beefing up the existing search paradigm, we thought this needed a new top-down approach.

I opted to keep the basic report search, but incorporated a much more robust Advanced Search feature, allowing users to essentially “build their ideal neighborhood” using any number of selections; from school class sizes and ethnicity, to real estate costs and crime risk. Because the number of items a user could choose from was extensive, it was essential that the interactions made sense and were quick to use. Whether we used checkboxes, sliders, or radio buttons, it had to feel easy to use, friendly, and engaging.

I started with wireframes and UI flows, which helped my client visualize things like sliders, expandable/collapsible boxes, and the ability for users to refine their search once they got their results. And because certain selections were only available as a subscriber, I needed to make sure this was clear to users, and also enticing enough to want to sign up.

After a few iterations, we finally got to a point where a design was in order. By using easy to read fonts, as well as larger click targets for things like checkboxes and radio buttons, it was easier for users to go through and quickly make their selections. And because this will likely be made available on mobile devices in the near term, I kept this in mind when designing the layout, which follows a standard grid design.

Because this product was being released in phases, the next step was to create a subscriber-only area, where users could then save neighborhoods and search results to their Account page for retrieval later on. This also had its own challenges in terms of the UX; from letting the user edit and organize those saved items, to adding engaging prompts to get them to subscribe in the first place, down to presenting the various levels of subscription prices in an easy-to-digest format.